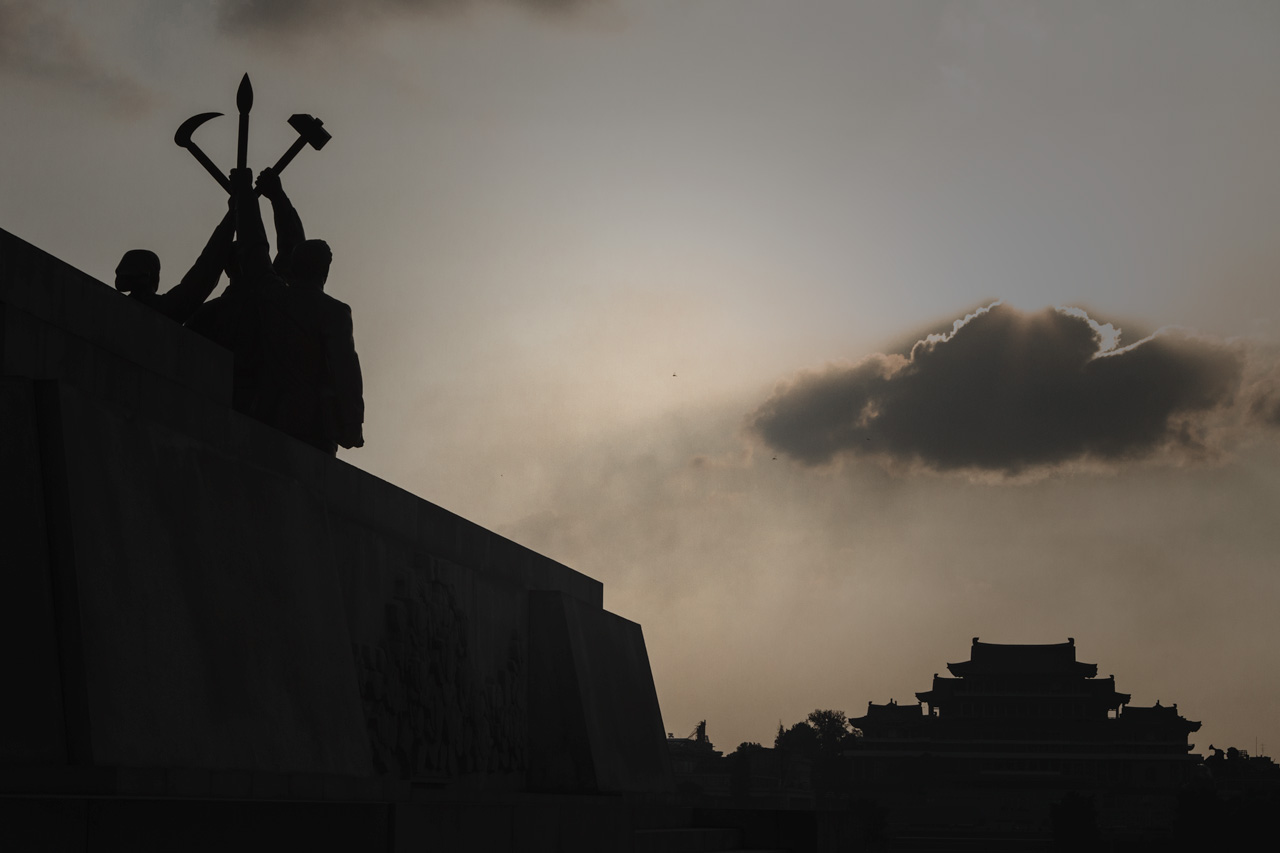 The Welcoming Face
of North Korea

Understanding Tourism in the Hermit Kingdom

With only 800,000 inhabitants, Dandong is a relatively small city by Chinese standards and is known as the gateway to The Democratic People’s Republic of North Korea. Located on the banks of the Yalu River, it’s where Chinese tourists come to catch a glimpse of the Hermit Kingdom.

The tourism industry is at its busiest during the summer months. Souvenir stalls on the river promenade sell North Korean cigarettes, stamps and banknotes. Restaurants displaying North Korean flags have their doors wide open. For a small fee, you can walk halfway across the river on the old bridge that was partially destroyed during the Korean War.

Getting into North Korea as an independent traveller is impossible and Dandong is home to several private travel agencies that organise group tours into the country. Each day, the tour groups gather to embark on the four-day journey that will take them through one of the most closed states of modern times.

Chinese tourists travel to North Korea primarily for nostalgia about the China of 30 years ago.

We start our journey by taking a bus across the Friendship Bridge that spans the river to the North Korean border town of Sinuiju. State guides accompany each group at every moment of the tour and we’re met by one of the guides who will escort us throughout our journey.

He takes our passports and keeps them for the duration of the trip. Another official, his eyes stern and tired, thoroughly checks our bags, looking for whatever is on the list of forbidden items. The man sitting next to me has his USB stick confiscated but my laptop is deemed ok. Our mobile phones lay waiting for us back in Dandong.

We’re escorted past the old brick walls of the Customs House. It’s adorned with huge portraits of the country’s former leaders Kim Il Sung and Kim Jong Il; our first glimpse of the country’s ubiquitous propaganda. At the train station we board the train for the seven-hour journey to Pyongyang, North Korea’s capital. Our minders warn us repeatedly not to take photos from the windows and routinely check every compartment to make sure no one is disobeying their orders.

State guides accompany each group at every moment of the tour.

Through the windows we see endless fields and hills and the occasional village. We pass through some small stations and my Chinese companions are amused by the way the North Koreans are dressed, recognising the fashion of their parents’ and grandparents’ generations.

In Pyongyang another guide joins us. She’s a middle-aged teacher of Russian Literature at the university and becomes my personal guide for the duration of the trip. This situation does not favour me; while the Chinese-speaking guide constantly tries to organise the other 15 members of our group, the Russian-speaking guide has nothing else to do but hang around a few steps away from me, listening in on my conversations and peeking at my camera screen.

Our guides know all the names, dates and facts relating to the Korean War, the Revolution, the Workers' Party and The Great Leaders, but start to float away when we ask questions about Juche ideology, changing topic or mumbling incoherently. They completely switch off when we question them about daily life in the country.

Tourists are usually accommodated in the Yanggakdo International Hotel. Built on an island in the middle of the Taedong River, the hotel offers amazing views across the city. The two bridges connecting the island to the city are guarded and off limits for tourists. Our days are taken up with excursions but in the evenings we’re free to do what we please – as long as we stay in the hotel. There’s an in-house casino that provides the evening’s activities for some members of our group.

Our days are taken up with excursions but in the evenings we’re free to do what we please – as long as we stay in the hotel.

Almost all residents of the 47-floor hotel are foreigners and we’re accompanied by a handful of hotel staff, tour guides and bus drivers. Small groups of officials with party pins on their chests spend their time in the revolving restaurant on the top floor, drinking beer, eating peanuts and smoking cigarette after cigarette.

Each morning an army of buses waits for the tour groups outside the hotel, ready to drive them to the places that have been approved for foreign eyes – the monuments dedicated to The Great Leaders, the Pyongyang Metro, the demilitarised zone (the 'DMZ') and souvenir shops that sell ideological literature and ginseng.

The official four-day tour program usually has a fixed schedule but the itinerary for tour groups from China has several extras thrown in, including visits to Chinese restaurants and monuments dedicated to the North Korea-China friendship.

Some of the people in our group have sentimental connections to North Korea, the war and to the culture of their neighbouring country. They lay flowers at monuments, buy paraphernalia and sing "Arirang", a popular North Korean folk song that has evolved into the soundtrack of the revolution.

Every tour group itinerary includes a visit to Pyongyang’s metro system. The metro, one of the deepest in the world, has two lines and a handful of stations, two of which are open to tourists: Puhŭng and Yonggwang. Both stations feature extensive social-realism art on the walls and are reminiscent of Moscow’s famous chandeliered metro stations. Our bus drops us off at Puhŭng and we take the long escalator a hundred meters down to the brightly lit platform.

It’s one of the only times during the trip where we’re able to mix freely with people going about their daily business; some stare at us, others wave and a few try to pretend we don’t exist. We take photos together with school children, who wear a uniform of white shirts and red ties. Our train arrives and we ride to the next station, Yonggwang. Our minders herd us back up to the surface, where our bus is already waiting.

It’s one of the only times during the trip where we’re able to mix freely with people going about their daily business.

…primarily because it has some of the best examples of social realism design. 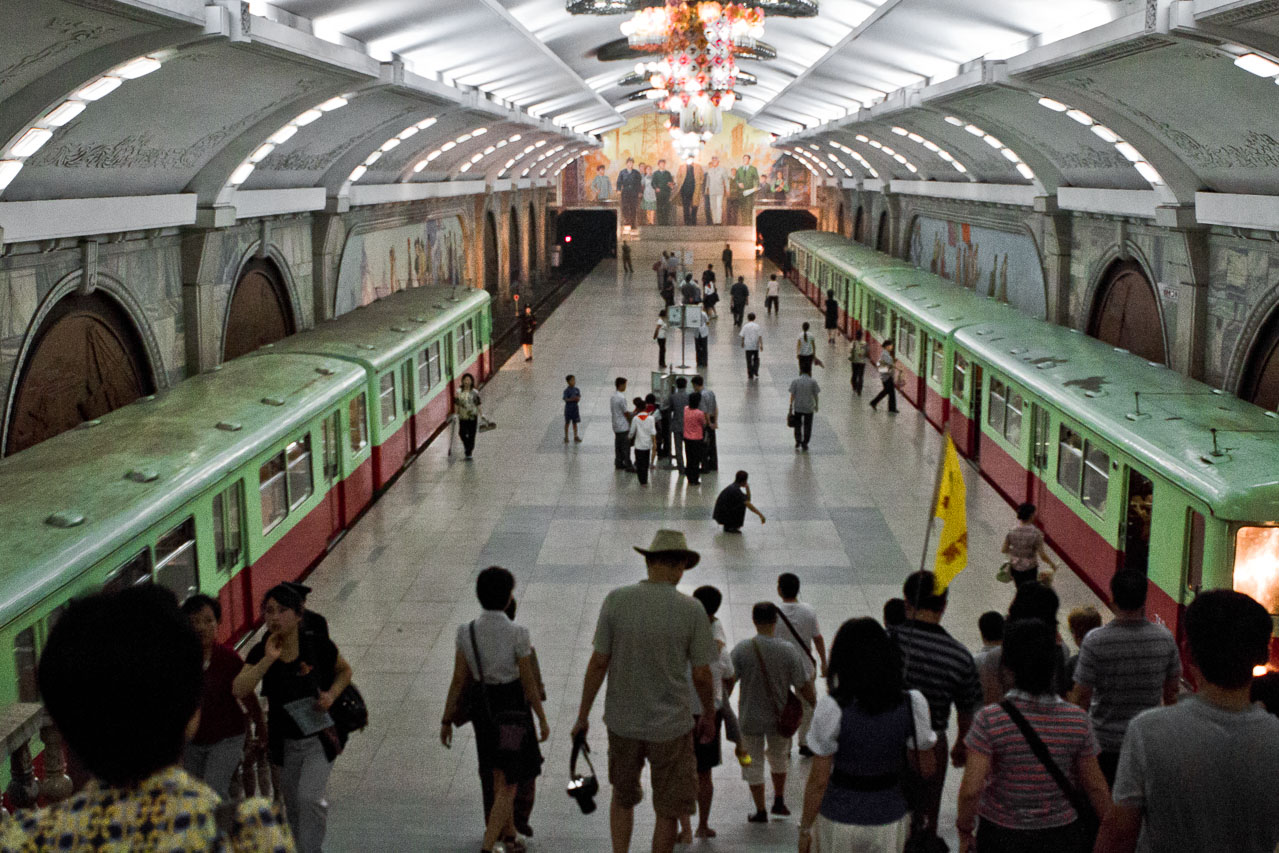 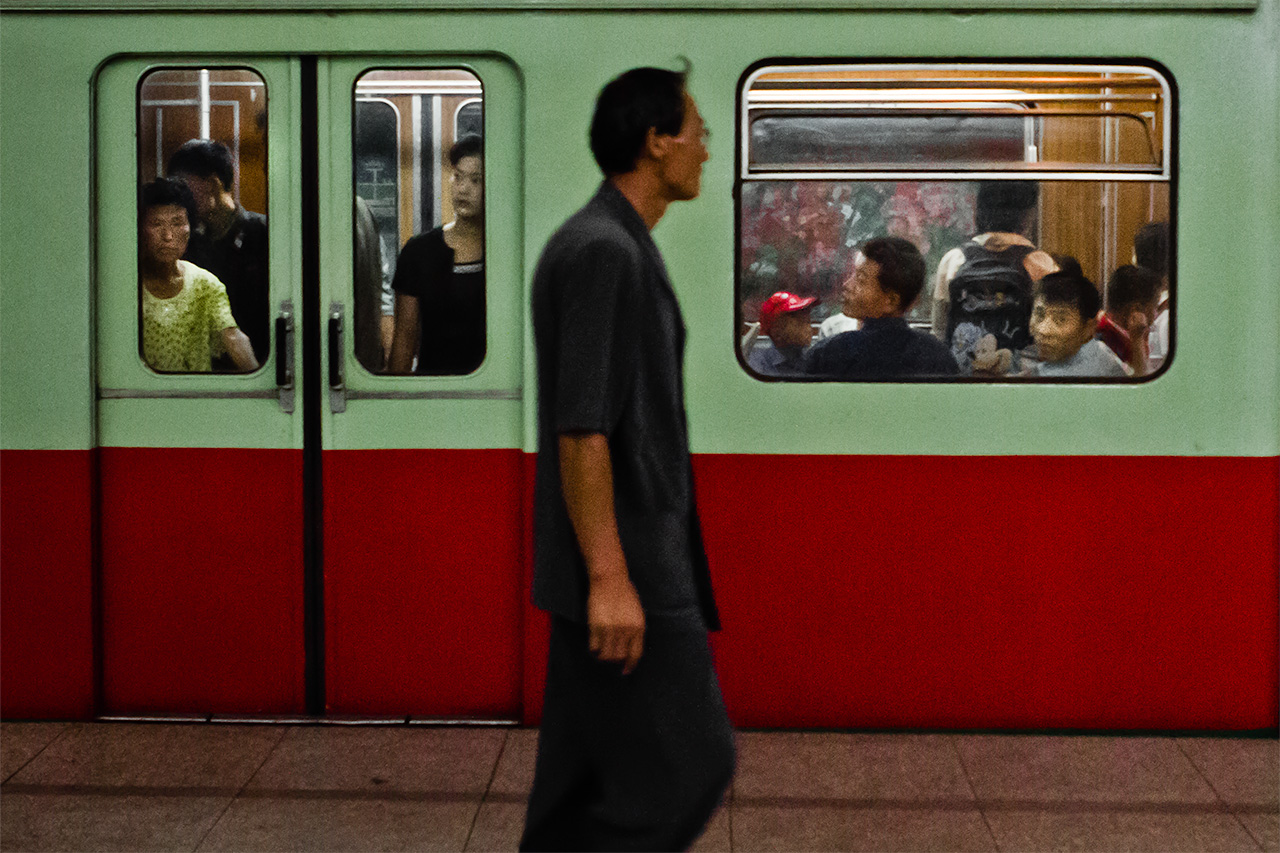 Tourists catch a train to the next station where they are escorted back to the buses.

We arrive at the palace in time for the performance that has been prepared especially for the tour groups. On stage, children sing patriotic songs under the ever-present, laughing faces of Kim Il Sung and Kim Jong Il, who watch over us all from the walls. The atmosphere is solemn and surreal as we see tiny five-year olds with ability way beyond their years sing and dance faultlessly in front of us. In the handicraft studio, children work mechanically, oblivious to the thirty foreigners with cameras crowding around them.

The famous Arirang Festival is held in August and September at the May Day Stadium. A 90-minute long mass gymnastics and artistic performance show, the Arirang Festival made its way into Guinness Book of World Records as the biggest event of its kind. We watch thousands of athletes, moving in perfect unison, tell a choreographed Korean folk story about a young couple separated by an evil landlord, an analogy of the two Koreas divided by war. In one sector of the stadium, around 30,000 more participants perform an enormous card stunt, using individual pieces of card to form massive images from history about the revolution and the war, as well as images of The Great Leaders.

A 90-minute long gymnastic and artistic show, the Arirang Festival made its way into the “Guinness Book of World Records” as the biggest event of its kind. 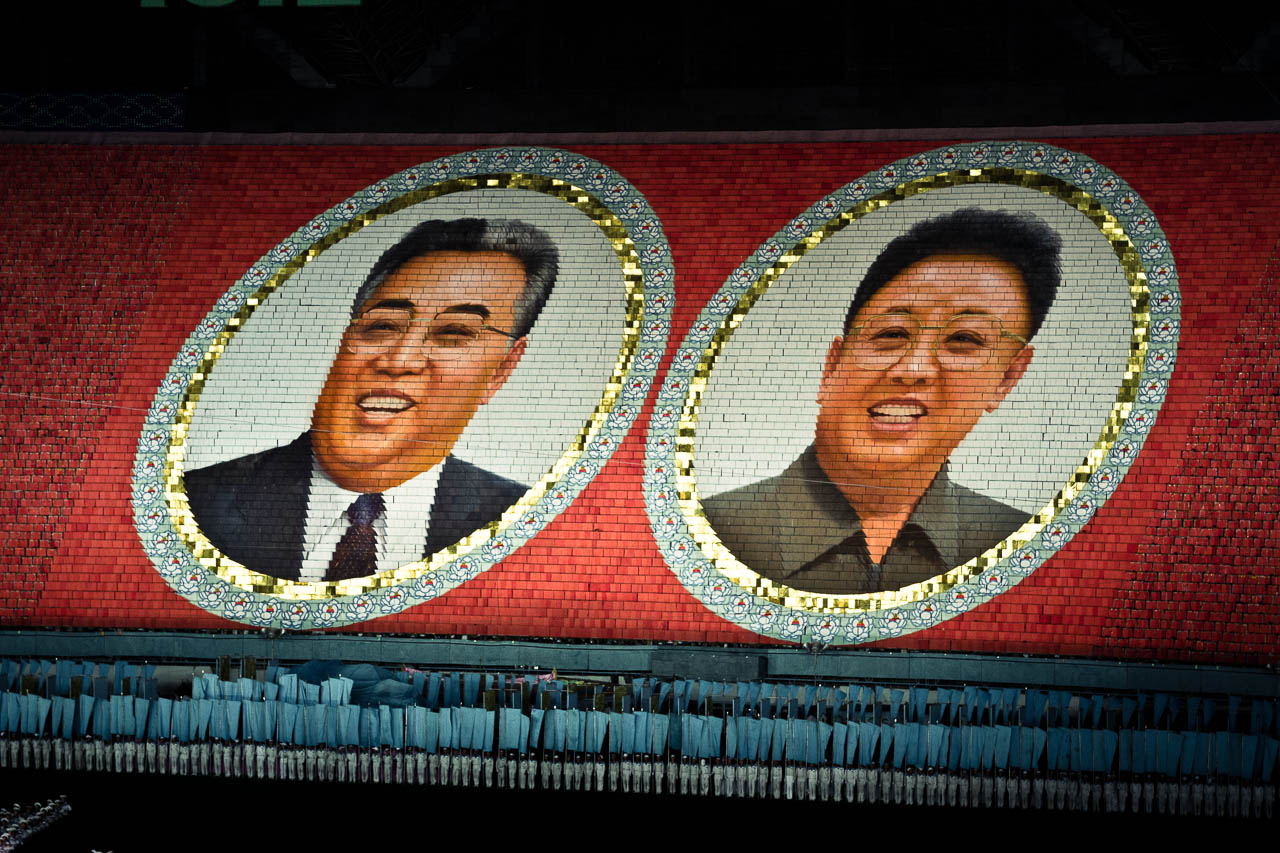 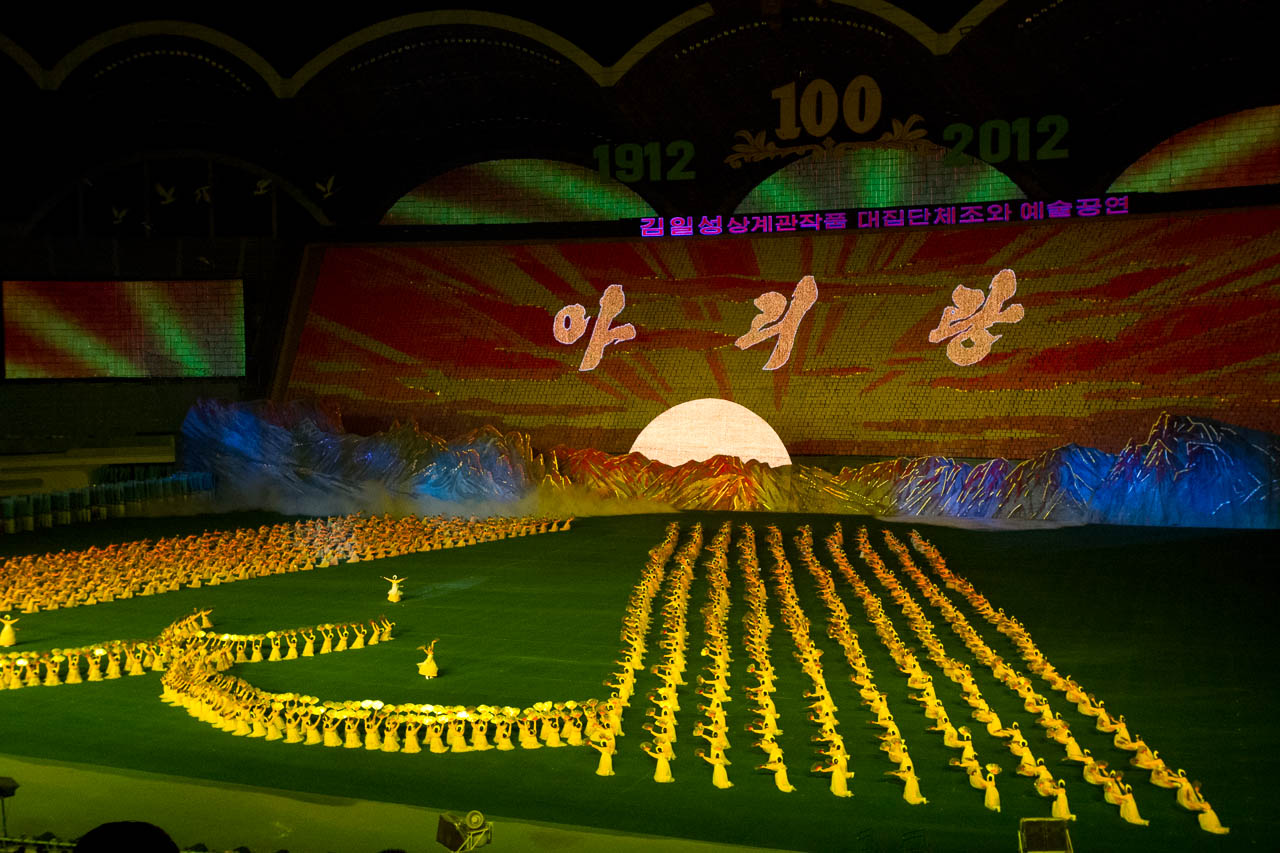 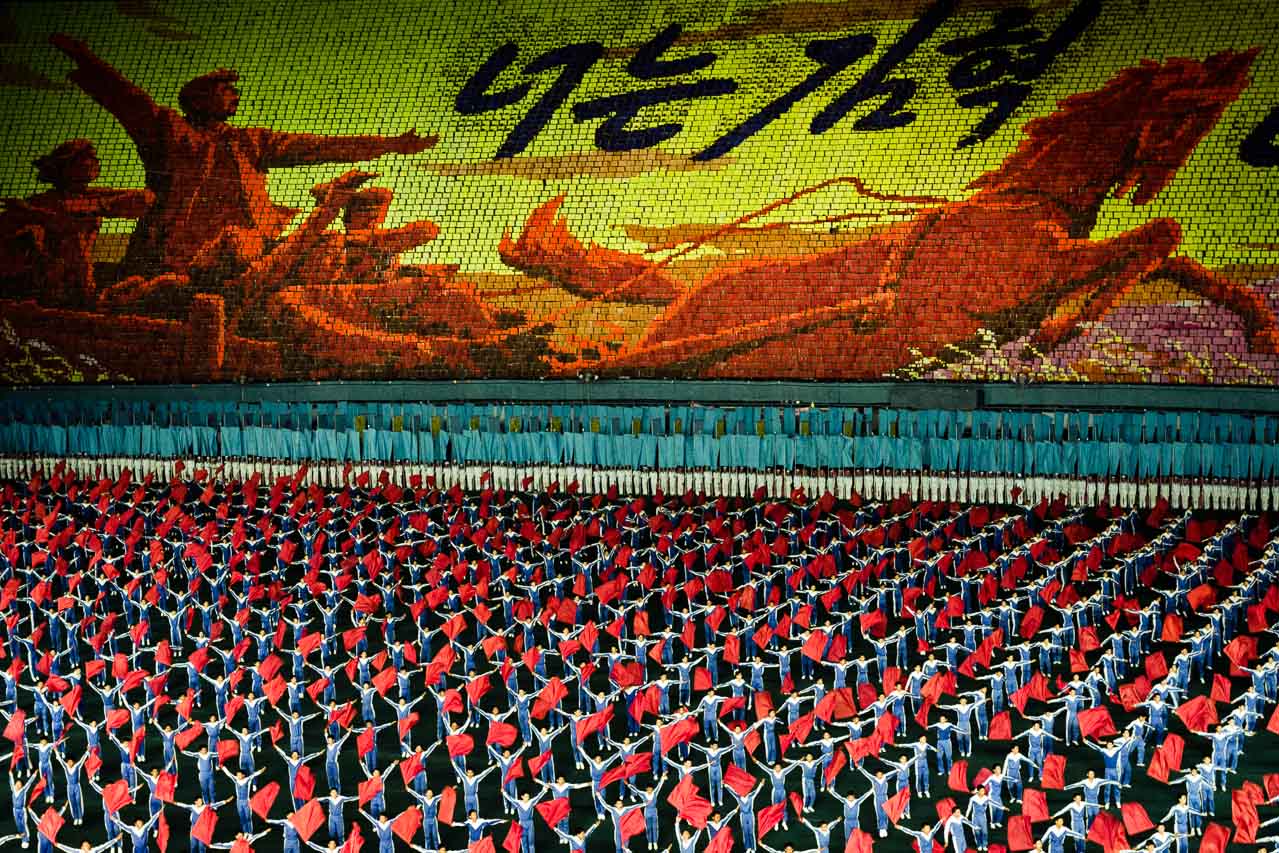 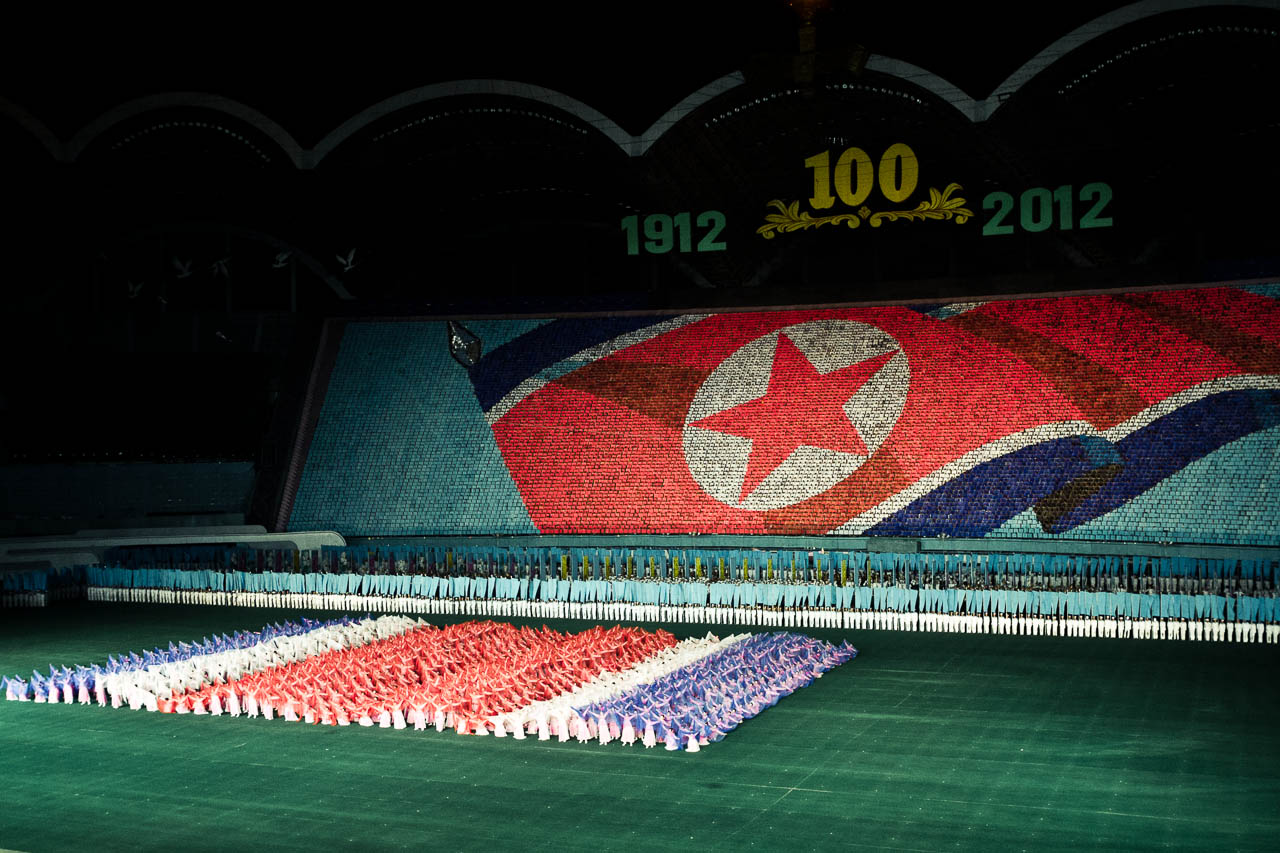 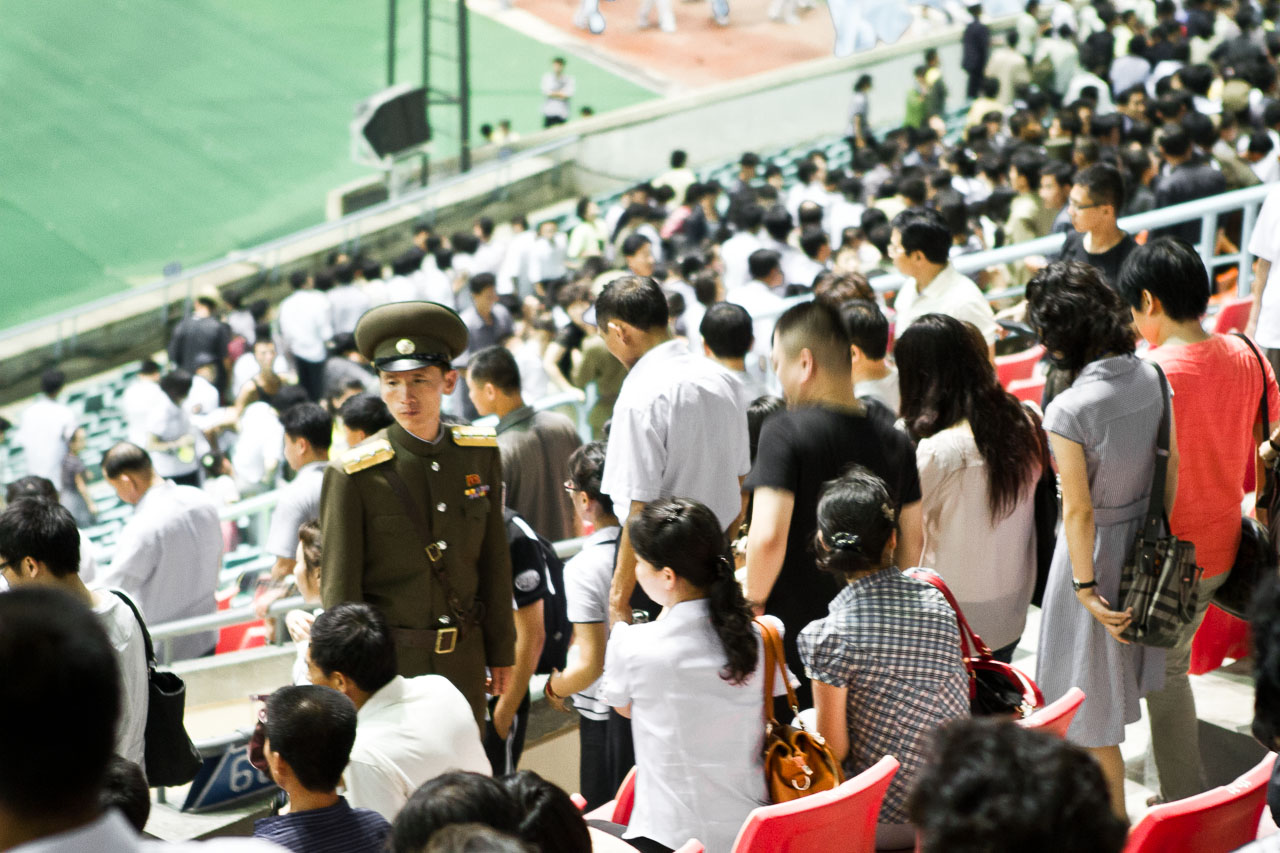 The last ten minutes of this show is a tribute to the Republic of China and its contribution to the Korean War. Our section of the stadium, where most of the Chinese tour groups are seated, burst into applause. Some people cry; others give flowers in an act of thanks.

Our tour includes a visit to the International Friendship Exhibition near Mount Myohyang. It’s the place where lavish gifts bestowed upon Kim Il Sung and Kim Jong Il by world leaders are stored. However, we are in North Korea during serious flooding and our itinerary is changed at the last minute. We head to the Nampho Dam instead.

The official explanation from our guides for this change is that a bridge was damaged during the flooding. News footage that we see after leaving North Korea showed catastrophically flooded villages and fields, a scene that our minders probably didn’t want us to see.

Nampho Dam is seven kilometres long and locks the Taedong River off from the Yellow Sea. The dam was constructed in the 1980s, with labour resources drawn from the whole country. We watch a video in the visitors’ centre and learn that, like most strategic projects in the country, the construction of the dam was led directly by Kim Jong Il himself. 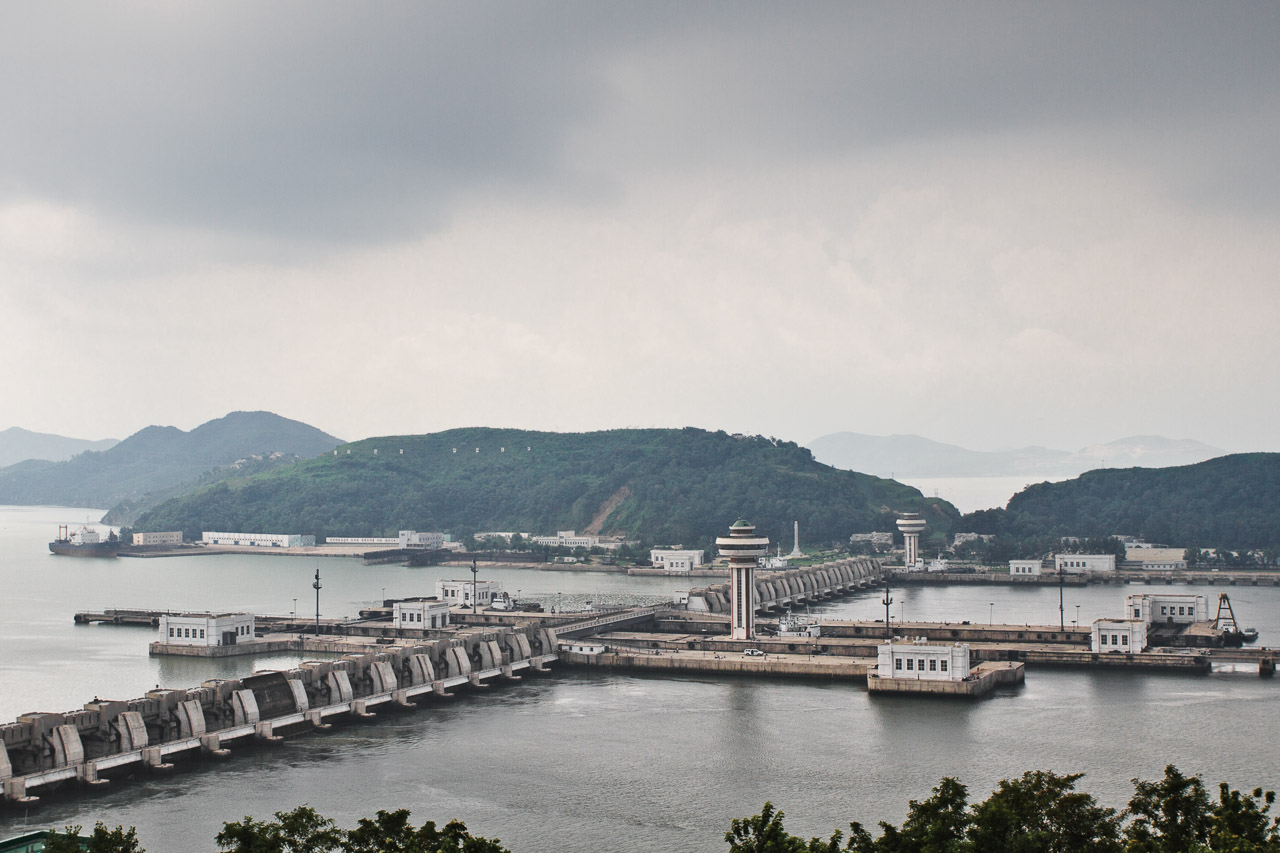 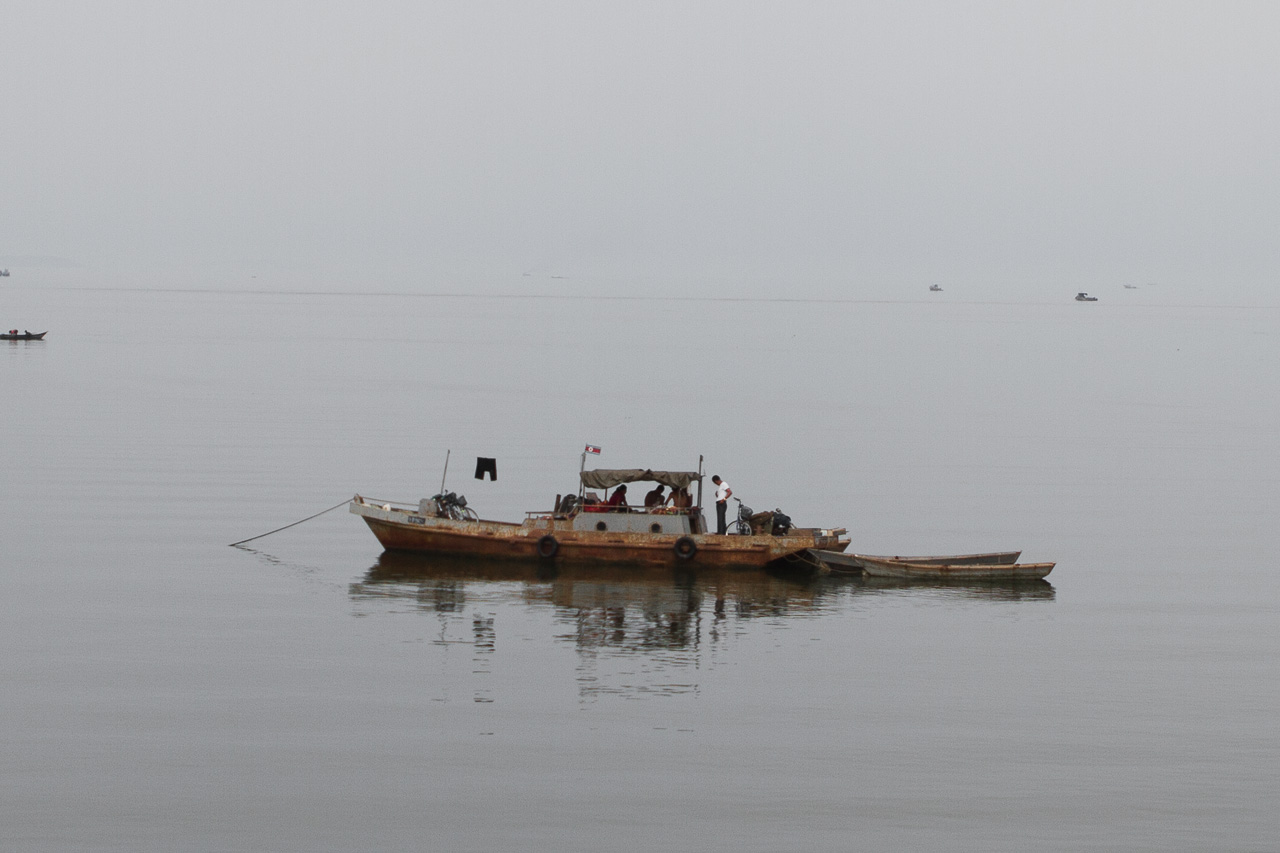 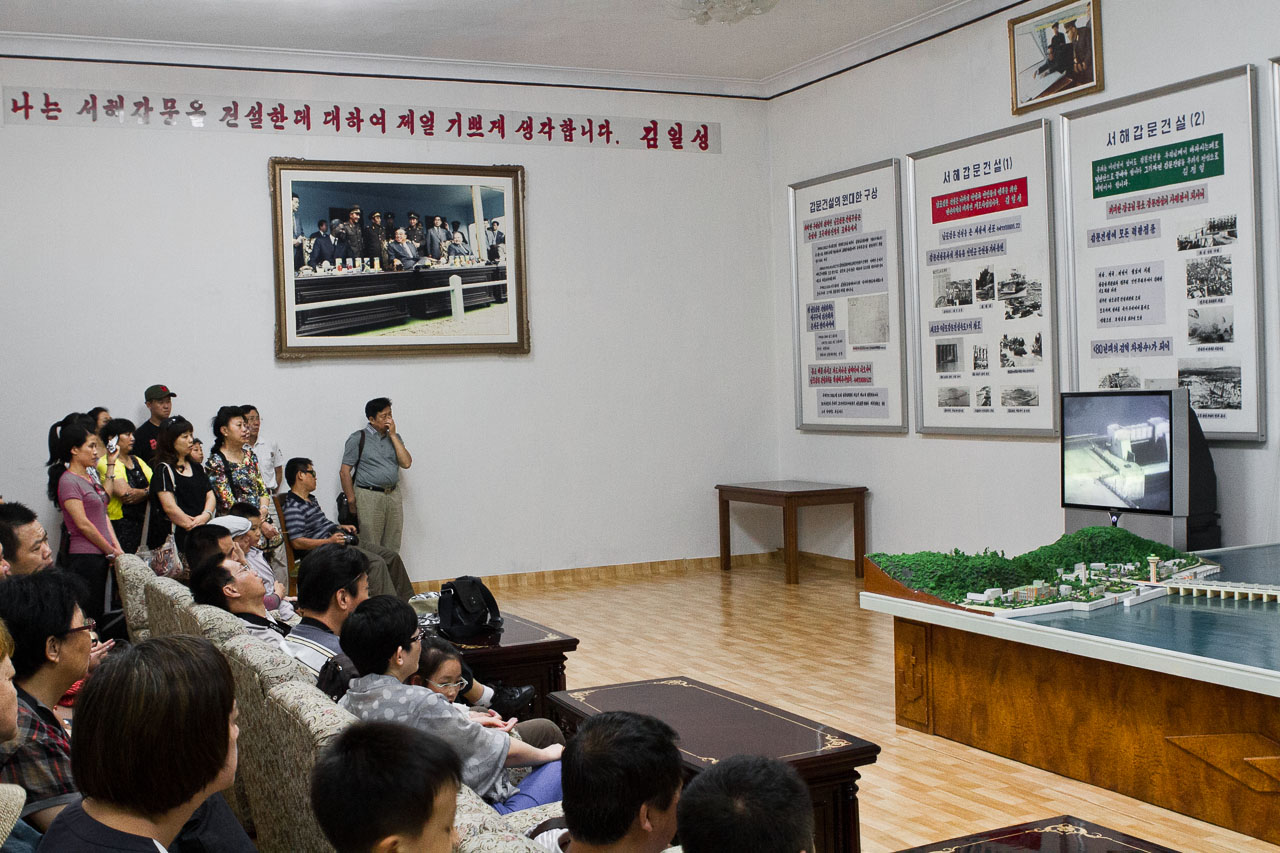 The 200 km trip from Pyongyang to Panmunjom takes us the whole day. We speed along the empty highway, its several lanes devoid of traffic, stopping at a couple of souvenir shops along the way. The group stock up on ginseng, a root that the Chinese believe cures cancer and sexual dysfunction in men.

Panmunjom is a village divided in half by the demilitarised zone – known as the DMZ. This is the place where the armistice was signed during the Korean War, splitting Korea in two. One side of the village is in North Korea, the other in South Korea. It’s considered to be the most heavily militarised place on earth.

We visit the Peace Museum, located in the building where the armistice was signed and are given a brief tour by a military officer . Then we are led to the border. Apart from the guards, the South Korean side of the village is empty and we don’t see any tourists milling about. We are allowed to wander around and take photos, which is quite unexpected given the seriousness of the place.

Panmunjom – the most heavily militarised place on earth 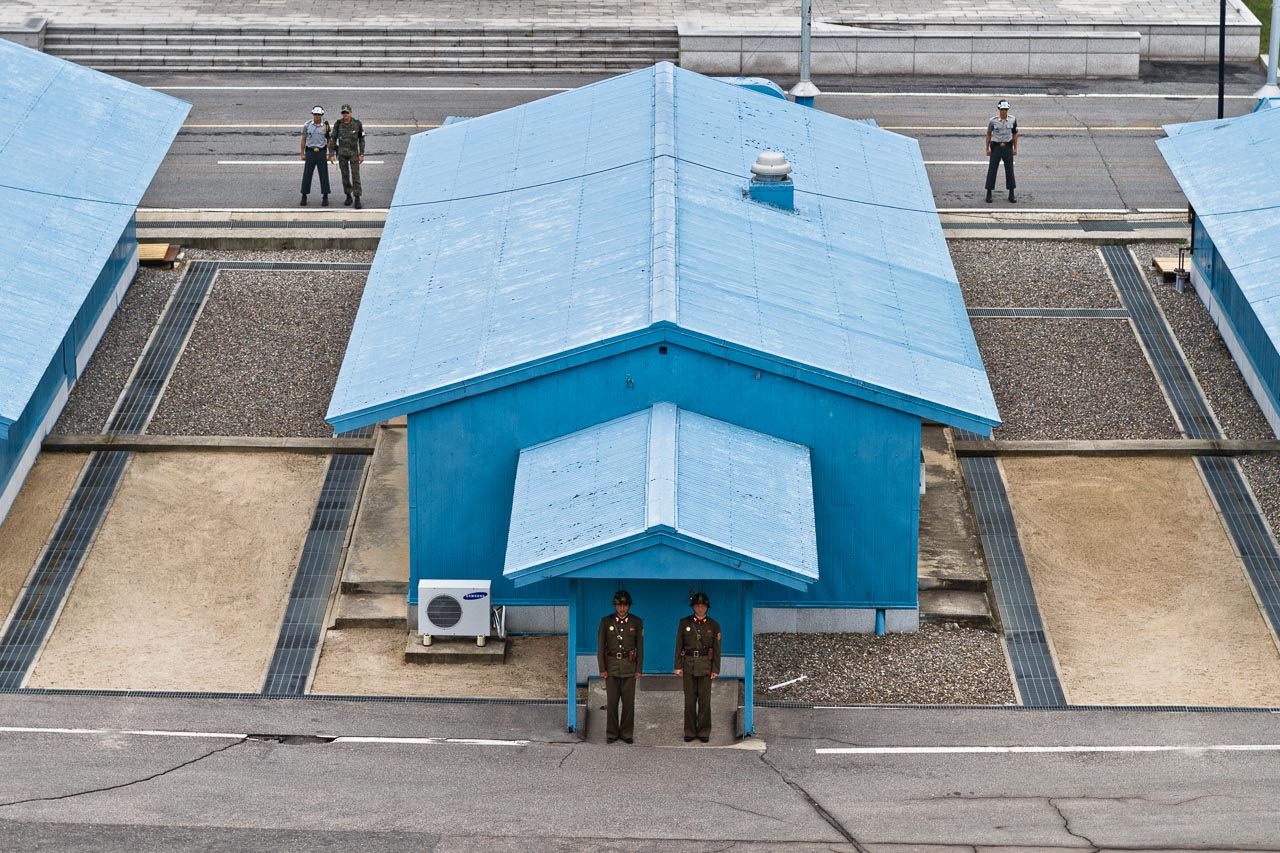 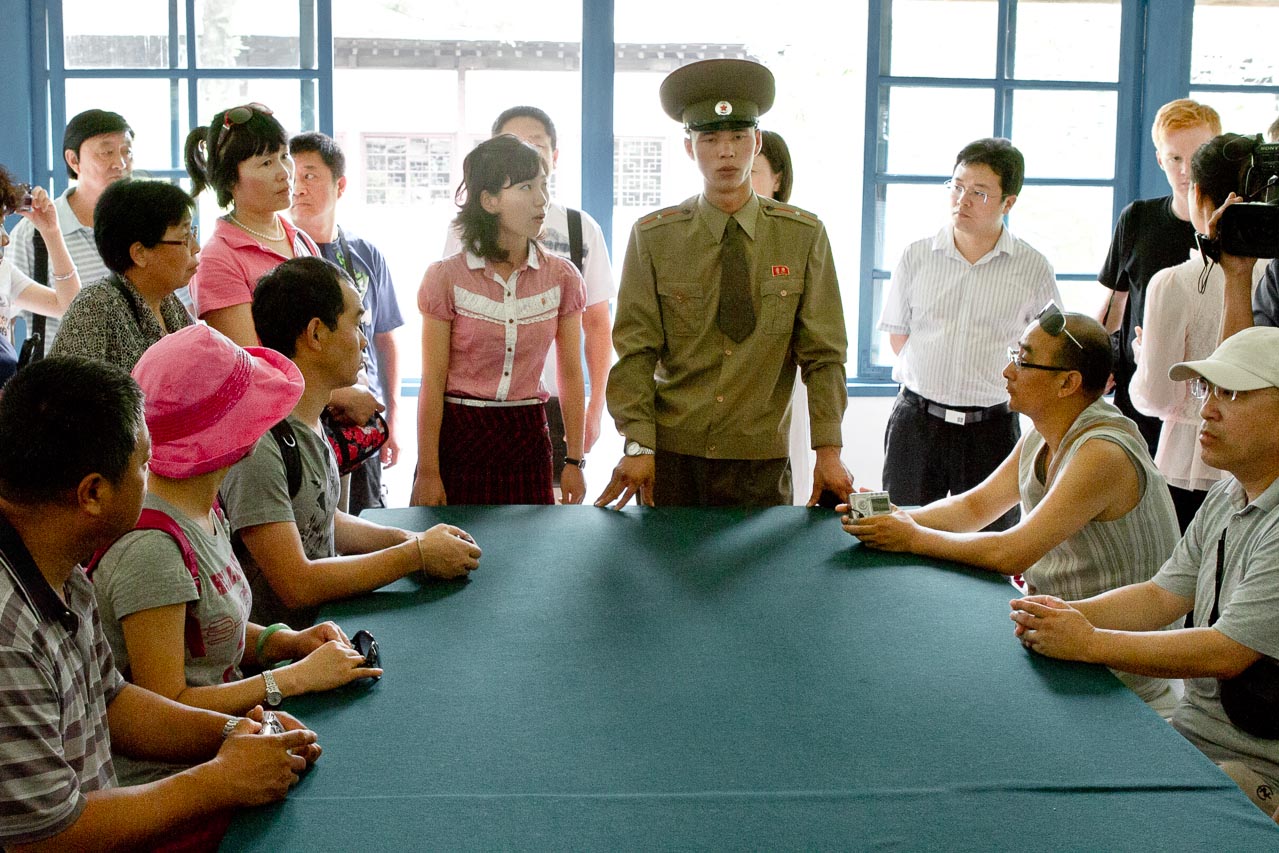 On our final day, we take the train back to the border town of Sinuiju. On the horizon China looms, its shiny glass buildings glinting in the sun. In Sinuiju, North Korean officials walk through the train and take each one of our cameras, scrolling through the images, censoring what they don’t want us to reveal once we cross the border. Our cameras are returned and the train starts to move towards Dandong. As soon as the train hits the Friendship Bridge, the last North Korean official hanging on to the door outside the train jumps off. The click of camera shutters floods the carriage. We’re back in the land of opportunities.

Scrolling through the images, the officials censor what they don’t want us to reveal once we cross the border to China.